Welcome to the new Shakespeare Quarterly Forum! We’re launching this space to offer our authors and readers an online space in which to continue—or start—conversations sparked by our articles and reviews. Our first posts will showcase the authors of our latest special issue, “1594” (Winter 2010), starting with a profile of noted theater historian Roslyn L. Knutson, who wrote our lead essay, “What’s So Special about 1594?” Next, Andrew Gurr, Holger Schott Syme, Leslie Thomson, and Bart van Es join us in a roundtable to discuss why 1594 is—or isn’t—a key year in Shakespeare studies and theater history. And look for news about the journal’s special issue on performance studies, coming this fall.
—David Schalkwyk
Editor, Shakespeare Quarterly
In January 2011, David sat down with the Shakespeare Quarterly Forum.
It’s been over a year since you took over as Editor of the journal [succeeding Gail Kern Paster]. How does it feel to be Editor of Shakespeare Quarterly?
What a question! It’s been great. It’s been very, very exciting; a big learning curve. . . .
Tell us about that learning curve.
Editing a journal requires an enormous amount of what you could call focused attention, to review submissions, talk to reviewers and editors, and counsel authors. Writing letters to authors, and tailoring each letter individually, has taken some getting used to.
[The Forum makes sympathetic noises.]
But what is most exciting is the opportunity not only to publish the best work in Shakespeare studies, but to shape the debates and conversations in our field. And that’s really what my main concern has been, not merely to reflect the field, but to give it some kind of shape—to provide the opportunity for people to engage with each other and ask questions and to start some kind of conversation and debate in the pages of the journal, rather than at conferences or in addition to conferences.
Have you been successful in starting and maintaining those conversations?
I hope, that in the year and a half that I’ve been editing SQ, that we have begun to do that—for example, that the “Positions” sections that we’ve published do just that. Our special issues and the open-review process [for the summer 2010 issue “Shakespeare and New Media”] certainly have done that—because by its very nature, the open-review process is a process of dialogical give-and-take.
Had you edited a journal before?
Yes, I’m the founding editor of a South African journal called Pretexts, which I started in the 1980s with a colleague, John Higgins. It was a general literary journal focusing on theoretical debates, particularly in South Africa. And because we had absolutely no administrative assistance at all, we were running it entirely by ourselves. As a young academic, just starting out in a career, I found that it was eating up my life! So after about two years, I resigned as editor, with regret.
Before coming to the Folger, were you a regular reader of Shakespeare Quarterly?
I read SQ entirely instrumentally—zeroing in on particular authors or articles. So it’s particularly ironical that what I’m trying to do with Shakespeare Quarterly is to make it something a bit like—this is just an analogy—the London Review of Books or the New York Review of Books, where people feel not simply that they can get whatever article on the topic they’re working on off the internet, but that they look forward to reading the journal in the way that you look forward to reading the London Review of Books or the New Yorker or whatever, as a regular, exciting piece of scholarly debate and conversation.
Speaking of electronic publishing, is there still a place for Shakespeare Quarterly as a print artifact?
That’s what I’m hoping, that there is indeed. In its electronic form—as a purely electronic journal—I don’t think Shakespeare Quarterly can provide the same kind of reading experience. For example, I read the London Review of Books, the New York Review of Books, the TLS, the New York Times in their paper formats. I would never be happy with an electronic newspaper.

Because there’s something about sitting and reading through a newspaper or something like the New York Review of Books, which is different from cherry-picking news, cherry-picking headlines. One opens oneself up to discoveries, the unexpected, and there’s a kind of discursive relaxation, I think, which I find very important in my life. I read scholarly journals regularly, but I read the New York Times from cover to cover every day.
Who is Shakespeare Quarterly’s typical author?
Well, that’s a difficult question. One of the interesting things about Shakespeare Quarterly is that it’s become the journal that young academics very much want to get into, because it gives them the imprimatur of being a really serious scholar. And I think it’s extremely good that Shakespeare Quarterly has been willing to publish assistant professors and even Ph.D. students. But it worries me a little that that sort of author seems to have predominated in the last couple of years—while the senior members of the field have largely stopped publishing in the journal. There are very, very few established senior people sending us their work.
Would you like to see more of that senior-level work?
I’d like to see a mix of the kinds of bright young academics establishing a career, publishing alongside senior people who have something new to say. That’s crucial—they need to have something interesting and new to say. And some of us, I suppose, don’t. So we don’t submit to journals that might reject us.
Where do you see the journal going in coming years?
I’ve tried to give it slightly more shape and individuality as far as individual issues are concerned. So our new “Positions” section is aimed at people doing cutting-edge and largely theoretical work in Shakespeare, affording them the opportunity not only of submitting their work to the journal, but also of getting responses from two senior people, who are sometimes the original readers and sometimes not. I hope that we’re encouraging people who are not simply caught in the historicist mode to consider Shakespeare Quarterly as a serious journal for their work, that we’re opening up a consideration of new approaches and new work—sometimes risky work—to critical reflection and debate. I think “Positions” is doing that, and I hope it’ll continue to do that.
We used to see regular reviews of Shakespeare performances—the latest season of the Royal Shakespeare Company, for example—in SQ.
Probably the most important innovation—which some people might regret—is that we’ve stopped Shakespeare Performed in its present form. The problem with Shakespeare Performed is that it was something of an anomaly; people were invited to write reviews of performances of Shakespeare without any particular focus or direction or critical framework. Once you’ve invited people to do that—some people did wonderful work—the problem for a journal editor, and especially a journal that has as much pressure on its pages as we have, is that once you’ve invited somebody to do that, you can’t reject it.
So in the place of Shakespeare Performed, we’re having a special issue on “Shakespeare and Performance” this fall, guest-edited by Sarah Werner. We’re hoping that that special issue will in fact rejuvenate the whole area of performance criticism and subject it to critical scrutiny and debate, and that we can return performance to the journal in a different way in the future.
Are you interested in having people suggest themes or subjects for “Positions” or special issues?

I’d be very open to suggestions, but I wouldn’t want to thematize the journal too much. Once you start introducing themes too extensively, you’ve actually cut out a lot of work that does not fall under whatever particular theme you might think of. And it’s in the nature of a theme that it’s already out of date. You think of a theme only because of work that’s been done in the past, and a theme can’t possibly anticipate new, contradictory, different, unusual work that’s going to be done in the future. So I think it’s fine to consolidate work that’s been done in the past in a special issue, but I think it would be absolutely debilitating for the journal to theme itself to such an extent that we exclude the unusual stuff.

How would you like your readers to use the SQ Forum?
We made use of vast electronic resources in the open-review process, which led to debate and conversation and dialogue, and that it seemed crazy not to use the opportunity for a forum to allow readers and contributors to continue debate and conversations and critical reflections that we can’t accommodate within the necessarily limited pages of the journal. And that we hope that they’ll use the SQ Forum for that. That’s really important. 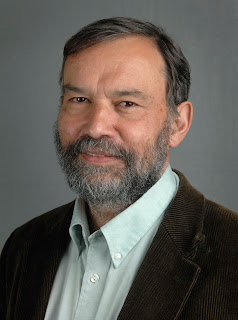 David Schalkwyk came to the Folger Shakespeare Library in July 2009 from the University of Cape Town. He serves as the Folger’s Director of Research, as well as Editor of Shakespeare Quarterly. The author of Shakespeare, Love and Service (2008), Literature and the Touch of the Real (2004), and Speech and Performance in Shakespeare’s Sonnets and Plays (2002), David has also published articles on South African prison writing and produced an English translation of Karel Schoeman’s 1984 novel ’n Ander Land, entitled Another Country (1991).  This spring, he is teaching a graduate seminar at George Washington University on love and Shakespeare, the subject of his current research.
Posted by Shakespeare Quarterly at 4:34 AM No comments: 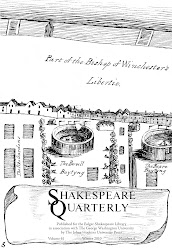 Shakespeare Quarterly
Founded in 1950 by the Shakespeare Association of America, Shakespeare Quarterly is a refereed journal committed to publishing articles in the vanguard of Shakespeare studies, notes that bring to light new information on Shakespeare and his age, issue and exchange sections on the latest research and debates, theater reviews of significant Shakespeare productions, and book reviews to keep readers current with Shakespeare criticism and scholarship.